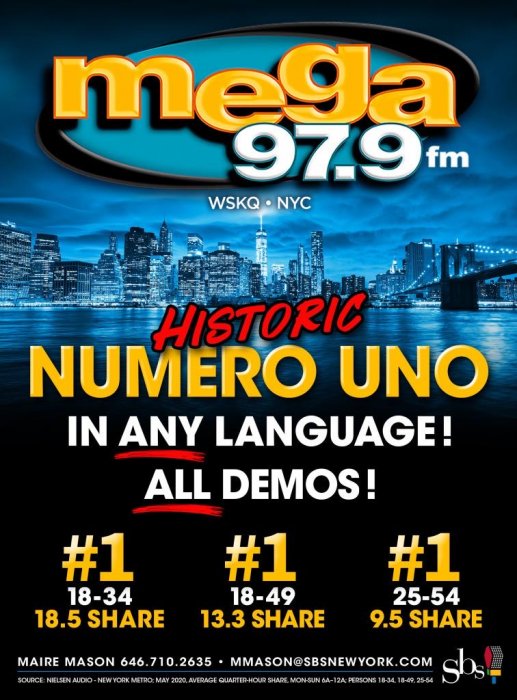 THE BEST LATIN POP STATION IN THE COUNTRY, AMOR 93.1FM IN NEW YORK – THE LEADER IN NIELSEN RATINGS GROWTH

UNPARALLELED RATINGS ACHIEVEMENT IS HISTORIC MILESTONE ACROSS ALL FORMATS AND LANGUAGES

New York, NY. (June 15th, 2020)— Spanish Broadcasting System, Inc. (“SBS”) (OTCQX: SBSAA), the leading Minority certified, Hispanic multimedia and entertainment company in the U.S., announces that its flagship New York City station, Mega 97.9FM (WSKQ-FM), the #1 radio station on the planet, has achieved a historic milestone in claiming the #1 ranking among all demos, Adults 18-34, Adults 18-49 and Adults 25-54 among ALL radio stations serving the Tri-State area, regardless of language or format in Nielsen Audio’s May 2020 PPM survey. Recently reported by Nielsen’s Audio, Mega 97.9FM (WSKQ-FM) has a historic record-breaking listenership than any other radio station in the history of PPM.

This historic achievement highlights the sustained dominance that SBS New York radio continues to have in the daily lives of today’s Hispanic consumers in the Tri-State area amid the COVID-19 pandemic. These recent ratings rank Mega 97.9FM as not only the most-listened-to station in the Metropolitan New York-New Jersey-Connecticut area but also set Mega 97.9FM as the #1 ranked Hispanic station in the nation for more than seven years.

Albert Rodriguez, SBS COO, commented, “Our NYC powerhouses Mega 97.9FM and Amor 93.1FM have continued to rapidly grow its listeners and serve advertisers by offering the best music, the most compelling personalities and the most exciting content in the market. Congratulations to the entire SBS NY teams for their incredible efforts all year long.”

“Mega 97.9FM (WSKQ-FM) has served as the epicenter for Hispanic culture in New York City for over thirty-seven years. These most recent Nielsen Audio’s May 2020 PPM survey results solidify our leadership position in the marketplace as we continue our service and responsibility to the New York Metro community and overall client base. Mega 97.9FM today is stronger than ever, with offerings expanding from over the air radio, digital, and experiential programs. These record-setting achievements are backed by the most compelling on-air personalities in the nation, programming the best in music and syncing with our community outreach. Congratulations to the entire SBS NY family for their incredible efforts, and making history once more in the Big Apple.” said Maire Mason, Vicepresident and General Manager of SBS New York.

SBS’s New York, Director of Programming, Arturo Sosa, added, “We have the #1 station in all of New York. Mega 97.9FM (WSKQ-FM) ranked top among all demos in New York City, and also Amor 93.1FM (WPAT-FM) continues to hold its leadership position with strong rating growth. We reach more listeners than any other media outlet in the Tri-State area, proud of our team for their accomplishments.”

“Coast to coast, our content teams understand radio and are dedicated to serving our listeners like no one else,” said Jesus Salas, Executive Vicepresident of Programming of SBS. “From Regional Mexican, “Movimiento,” Top 40, Pop and every format in between, our team works hard to deliver the best-in-class programming our audiences want.”

SBS continues to hold the national leadership positions in the following format genres: #1 Tropical, #1 Latin “Movimiento,” as well as the Hispanic station with the most listeners on the planet. 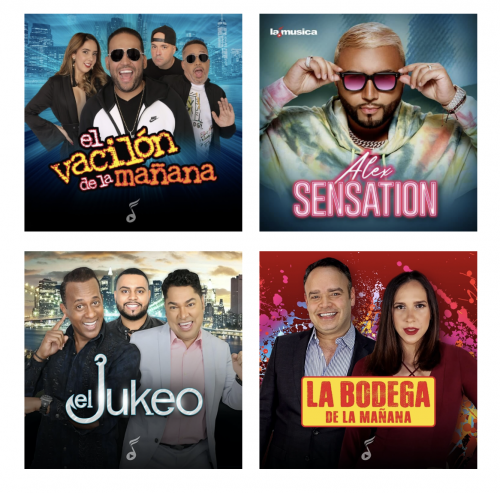