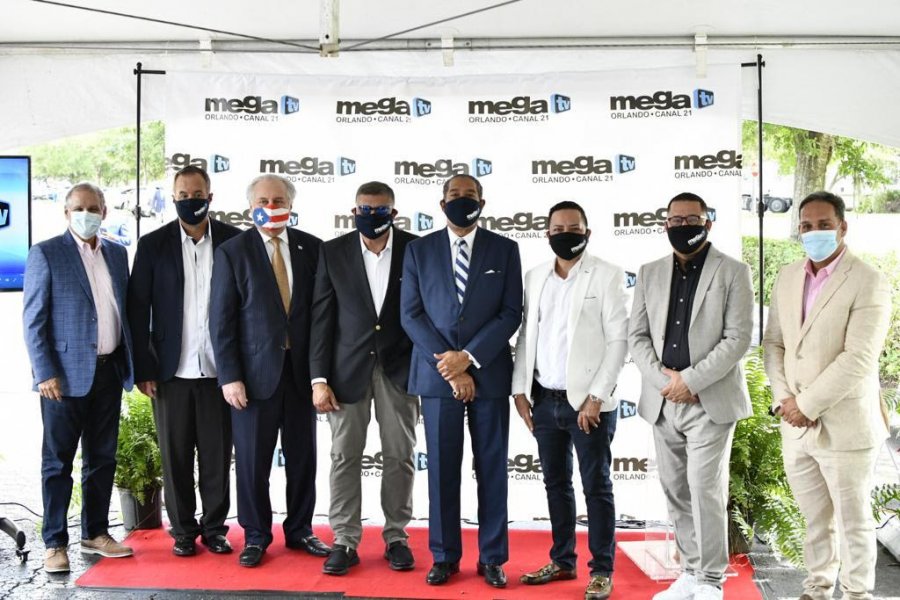 This new liaison channel between the Isla del Encanto and the Sunshine State will not only serve to strengthen the Hispanic legacy between Puerto Ricans on the island and those who live in the tourist city, but will also represent a considerable source of employment at a time when the unemployment rates from the pandemic have affected the television industry.

Orlando, FL. (September 16th, 2020)—In the midst of the worst crisis in television history due to the impact of a pandemic (COVID-19), executives of SBS, MegaTV television channel owned and operated by Spanish Broadcasting System, Inc. (SBS) (OTCQX: SBSAA), the leading Minority certified, Hispanic multimedia and entertainment company in the U.S., announces the “first connecting bridge” literally, between Puerto Ricans from the Island and from Orlando, with the official launch this September 15 of MegaTV Orlando, Channel 21, (MegaTVO21) under the godfathership of superstar, Jennifer Lopez and actor John Leguizamo, among other Puerto Rican artistic figures.

Puerto Rico-based television broadcaster MegaTV is expanding its audience reach to Orlando with the launch of affiliate station MegaTV Orlando Channel 21 embarking on a mission to capture the big Puerto Rican community and Hispanics in Central Florida. An estimated 330,000 Puerto Ricans live in Central Florida. With existing MegaTV stations in Puerto Rico and Miami, the channel’s programming will now be available in more than a third of Hispanic households in the continental United States.

With the theme of “the bridge that joins Puerto Rico with Orlando, without paying tolls,” the station will be led by Richy Miranda-Cortese, who is senior vice president and general manager of the new station. During the inauguration of the new operation in Orlando, local officials, business owners and guests joined in the announcement that comes during the COVID-19 pandemic.

“Our community welcomes MEGATV-Channel 21, another Spanish TV station that will offer information, education and entertainment to our growing and vibrant Hispanic community,” said Orlando Mayor Buddy Dyer. “We are proud that Orlando continues attracting national and international companies to our region to serve our Hispanic community while creating jobs and strengthening our local economy.”

Orlando City Commissioner Tony Ortiz, who hails from Puerto Rico, applauded and celebrated “the courage and vision of this company SBS-MegaTV” and highlighted the potential of this region for many companies to successfully expand their business to the Orlando area.”

“Not only does it bring an innovative communication platform to our community, also creates 20 direct jobs, 30 indirect jobs, for a total of 50. There’s also the economic benefit, especially in these times. I’m more than happy and proud to see that entrepreneurs and business leaders are investing in this region,” said Ortiz, also president of the Florida League of Cities, comprised of 411 municipalities in the state of Florida. “In the challenging times we live in, it fills us with pride to see our executives and business leaders investing and strengthening our local economy,” Ortiz said.

For Albert Rodriguez, COO of SBS, “MegaTV Orlando, channel 21, is the perfect complement that we expected to continue being the leading company of minorities in the field of entertainment, radio, TV and digital for Hispanics in the United States.”

“We salute the good reception of this channel, which comes at a crucial moment in the history of the television industry and which will provide sources of employment for our Hispanic community, as well as being an important channel for promoting those entrepreneurial businesses that are today giving one hundred percent, through their labor efforts, for the economic growth of this prosperous and thriving city of Orlando. I am very grateful to all of them for the welcome we have had,” emphasizes the c-class executive, who also values ​​the loyalty of his millions of viewers.”

“We are proud to announce that MegaTVO21 reaches the multicultural market of Central Florida with a varied programming that will serve both the Puerto Rican and Latin American communities. Our focus is on providing engaging content and healthy entertainment,” said Richy Miranda-Cortese, senior vice president and general manager of MegaTVO21. In the same way, the executive will work in coordination with the other markets to execute a strategic action plan.

“The company will carry on with its mission to keep building more communication bridges to continue increasing the audience and reaching more homes. It fills us with pride, especially in these times of so many challenges, having achieved such an important expansion plan as it’s important for the long-term development of our company,” said Sixto Pabon, vice president of operations for SBS Puerto Rico.

Meanwhile, for Victor Roque, general manager and vice president of sales of SBS, Puerto Rico, “in addition to being a great step for new fields in the Hispanic television market, MegaTV Orlando channel 21, arrives at the right moment, highlighting the value that the Hispanic community in general constitutes for the company.”

Jose Perez, vice president of programming and production for MegaTV, said several Puerto Rican entrepreneurs have opened businesses in Orlando and “were waiting for an opportunity like this to market and exhibit their products.”

The “El Molusco y Los Reyes de la Punta” radio program broadcasted live from Orlando at its regular time slot — from 3 p.m. to 7 p.m. Jacky Fontánez, host of “What’s Up,” on La Nueva 94 FM will be broadcasting from several locations in Orlando throughout the week.

“Papeleta Rosa” with Saudy Rivera Soto and Magda; and “Informe 79,” with Laiza Torres programs were broadcasted live from Orlando.

City officials present at the event

Orange County Commissioners Mayra Uribe, Maribel Gómez-Cordero and Kissimmee Mayor Jose Alvarez celebrated the theme of the station. Gómez said the addition to the Spanish-language media is “great and many friends of the island are as excited” as her to have this kind of programming. “I’m mega, super excited with this great news. This is going to be an A+ between Puerto Rico and Orlando,” she said.

The channel will air iconic programs that many “boricuas” are watching from Orlando, connecting with their culture and to keep updated about what is happening in the island. For many Puerto Ricans, a program like “La Comay” is part of their memories of the island.

MegaTV Channel 21 Orlando will offer a varied programming proposal adjusted to the multicultural market of Central Florida. The mission of the channel will be to provide attractive and fun content with a positive impact and healthy entertainment.