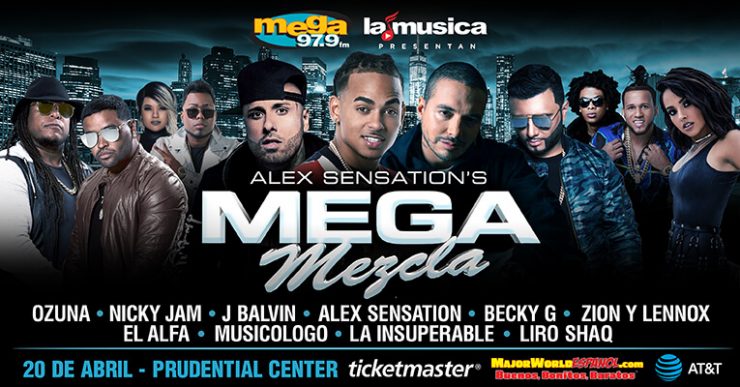 The “Mega Mezcla Alex Sensation” from Mega 97.9 FM and LaMusica APP promises to be a euphoric concert that will get fans moving to the music of their favorite artists. The concert will bring a spectacular set of scenery, lights and sound to allow these superstars to, as always, put on a masterful show.

Tickets will be available online at www.ticketmaster.com and through the phone at 1-800-745-3000. Join the conversation on social networks using the hashtag #MegaMezcla2018. Follow on Twitter and Instagram @mega979nyc, on Facebook at Facebook.com/Mega979FM and online at http://lamega.lamusica.com.

“Our goal has always been to produce unprecedented events and on April 20 we will be bringing together these great figures at the iconic Prudential Center,” said Bianca Alarcon, Head of Content, LaMusica App.

“We are pleased to present this mega production with the best music and concert technology; So that the faithful audience of Mega 97.9FM could enjoy a show of the best quality possible,” said Maire Mason, VP and General Manager of SBS New York.