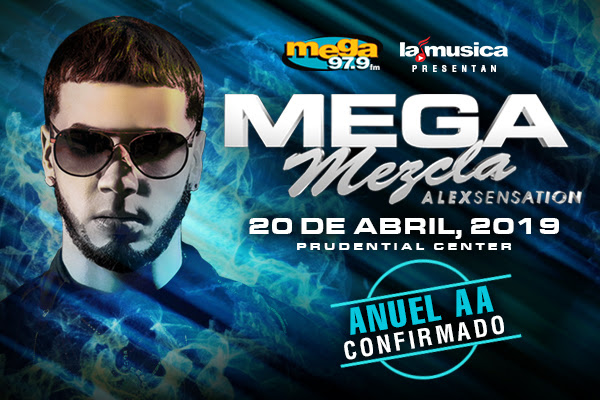 New York. NY. (February 5, 2019)—LaMusica App, Spanish BroadcastingSystem, Inc. (SBS) (OTCQX:SBSAA) and Mega 97.9FM, New York’s #1 station regardless of language, will once again celebrate across the nation with its signature concert “MEGAMEZCLA Alex Sensation”. The show will bring performances by some of the year’s biggest recording artists including Anuel AA, the leader of Latin Trap, who is sweeping away the charts. Mega Mezcla 2019 returns to the Prudential Center in Newark, New Jersey on Saturday, April 20th, 2019. Tickets are on sale at www.ticketmaster.com.

The first announced artist is Anuel AA, currently one of Latin music’s bestselling artists. He is hailed as the leader of the Latin trap movement and is known for his provocative lyrics and crude storytelling ability. Anuel AA’s debut album Real Hasta La Muerte landed at #1 on Billboard’s Top Latin Albums Chart and is certified Platinum by the RIAA. He has built a dedicated legion of 10.5M followers on social media.

His latest single “Secreto” has generated more than 155 million views on YouTube, 160 million combined streams on all digital platforms alongside Karol G and is certified 3x PLATINO in Peru, 2x PLATINO in Colombia and PLATINO in Ecuador, United States and Puerto Rico. Additionally, “Secreto” can currently be found on the Top 10 online in 17 countries and Top 10 on iTunes in 16 countries. The full artist line-up will be announced in the near future on Mega 97.9FM and across social media platforms. Make sure to tune in to Mega 97.9FM and LaMusica App for more these exciting lineup updates.

The “Mega Mezcla Alex Sensation” from Mega 97.9FM and LaMusica App promises to be a euphoric concert that will get fans moving to the music of their favorite artists. The concert will bring a spectacular set of scenery, lights and sound to allow these superstars to, as always, put on a masterful show.

“Our goal has always been to produce unprecedented events and on April 20 we will be bringing together these great figures at the iconic Prudential Center,” said Albert Rodriguez, COO of SBS.

“We are pleased to present this mega production with the best music and concert technology; So that the faithful audience of Mega97.9FM could enjoy a show of the best quality possible,” said Maire Mason, VP of Sales and General Manager of SBS New York.